Traveling abroad last year, I wrote about the many festivals I happened upon. And they always proved to be about so much more than music…they’re atypical experiences with fellow strangers, in a communal social environment. Something like that.

Last Saturday was Day One of the Whale Rock Festival held at Castoro Cellars Winery in Templeton, CA. I could have found at least two reasons not to attend: 1. Waiting until the last-minute, ticket prices were at their highest. 2. The temperature was supposed to blister at 102 degrees. Then I also found Perspective: 1. In all my experience, festivals have been worth their while and immeasurable by currency. 2. Festival-goers are playful and creative folks – costuming loosely and acting accordingly! 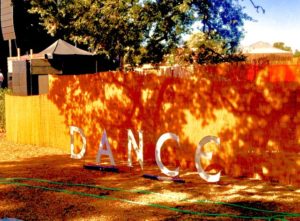 I don a light, cotton dress (recently purchased in Costa Rica to beat their scorching heat), a sunhat, sunglasses and flat sandals. In my backpack is an empty water bottle (to fill at their free watering stations), a bandana, a sari (to spread), mints and money. Over my shoulder hangs a low-rise beach chair. (My first time to bring one; usually I dance the day away, but with high temps and elder age, I think it prudent to have a place to rest my booty).

It’s mid-afternoon under a hot dry sun when I arrive. There is some truth to the saying, “But it’s a dry heat.” It’s not so bad. Parking is organized and a breeze (no breeze). For those of us who park somewhat distant, a tractor pulling a flatbed serves as a shuttle. The young guy I sit next to on the shuttle is also behind me in the line of entry. There’s no flirtation, simply a recognition of human connection; we were simply drifting and withIn moments we decide to find a shady spot to place our stuff as a basecamp. Note: How amazing to live in a place where one can leave belongings without worry that they’ll be gone upon return?  After living in cities most of my life, I appreciate this kind of thing more now. The second band is just finishing – time for a kickstarter. I head in the direction of wine, and he of beer.  Before I stroll away I mention, “I’m keeping an eye open for a friend I think might show up,” (blog wink).

How the festival has grown since my first and last visit in 2014!  Under a large open canopy are collections of colorful cushions and yoga mats. Water misters gently cool the crowd. Food stalls line the ground’s perimeter, offering options from BBQ to vegan. Vendors display art and artier crafts. Another exceptional addition, while the main stage is dark and prepares for the next act, a second stage highlights local bands. 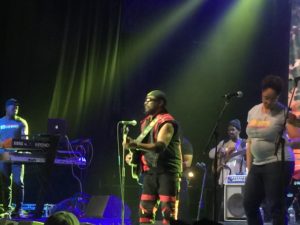 Toots Hibbert
Toots and the Maytals 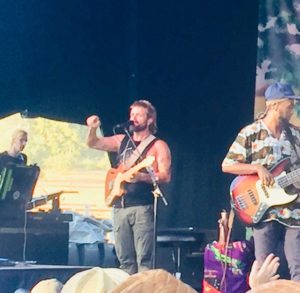 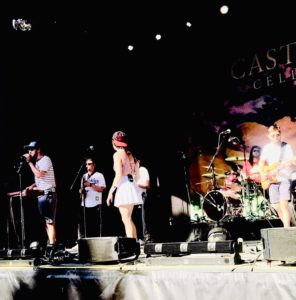 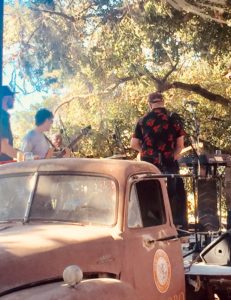 When I mosey up front to the local stage, Watkins The Positive Agenda is playing some kickin’ funk out of the bed of an antique pick up truck. I chat with the lead singer afterward. “After living immersed in New Orleans music for twenty years, thank you for giving me the funk I need.” He brightens up with mention of New Orleans and offers me a free CD to which I give him 10 bucks and declare, “Thank you but l support live music.” Although CD’s are becoming outdated (they’re not even in new cars for crying out loud), I’m holding out and hanging on to my player (I finally parted with my VHS and videos in the last move).

I meander back to the main stage to hear Lawrence, an engaging brother and sister act from NYC, rockin’ out. Dance is contagious. With every spin, I spy folks groovin’ in their happy place. Songs later and sweating like a barnyard animal, I seek basecamp for hydration. I hadn’t sat down for five minutes and my new acquaintance Michael appears. It’s 4:00. Headliners Toots and the Maytals come on at 8. One more beverage, no problem. We replenish and dance independently but aside each other for Xavier Rudd, a OneLove dude from Australia. But one can only dance for so long to a reggae beat without weed.

We find our base space and get to talkin’ again. Oblivious to the music, philosophy takes hold: I speak on consciousness and he on Rudolf Steiner. Here are we, years difference between us, sharing wide-eyed conversation at a music festival. Our paths most likely will not cross again, but we both learn. And that’s a good thing. Thanks, Michael. 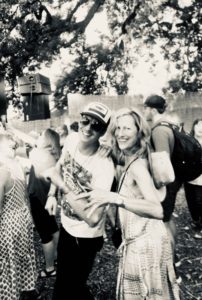 Stranger friend and I

Now it’s Sunday night and I don’t think I have it in me to go out again. But the Sirs of Swing, a gypsy jazz band I’ve heard are good, are playing. And doesn’t it usually work this way? Once levitated up and out the door, a flow begins (or is already there and you simply align with it). The restaurant host seats me at a community table in the garden where the Sirs are Swinging. Across from me sits an elegant white-haired 70’s-ish lovely and familiar face. She says, “Hey! I’ve seen you at the Harmony Jazz Series but not in a while. I was hoping to run into you, Heidi, right? I’m Barbara. Would you be interested in occasionally hosting the jazz nights? No pay but free wine and dinner included.”

As I listen to the gypsy sirs that stir my soul, I write in my notebook, “I love and appreciate solo time. Even so, look what happens when you get out of the house, out of your skin, out of your mindset? Opportunities. And, you might see an old friend; maybe meet a new. Any way, it’s a live, life experience. Seek balance.” 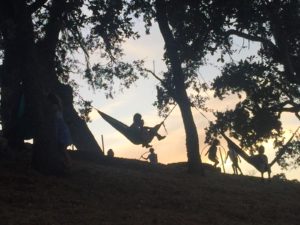 “What a person thinks on his own, without being stimulated by the thoughts and experiences of other people, is even in the best case rather paltry and monotonous.”  – Albert Einstein